Most problems with left-handed writing arise out of a scewed hand position. It may not be a big problem in everyday writing, but when you try to do calligraphy, it will become one. Naturally it is not easy to readjust ones writing habits, but if you wish to improve your handwriting and eventually get more joy out of it, the following depictions may help.

The usual objection to this is that the pen nib can't be pushed without scratching, but this will only be a problem when you put too much pressure on the pen. If you try to avoid the scratching by bending the hand upwarts and writing from above, writing with round hand nibs won't work.

Most people put more pressure on the pen than necessary. In many cases it is a habit that started due to stress while learning writing in school, but in fact it is also enforced by many writing instruments, which do not work propperly without much pressure. You need to relax your hand! There are writing instruments and pen nibs which work well and glide easily over the paper with little pressure. You have to find these. If you want to write with dip pen nibs, choose a ball pointed nib with little flexibilty or a pointed nib with an upward bent nib tip. ▪ You will find these in the calligraphy shop.

Writing with Round Hand Lettering nibs.

As you can see on the picture, a vertical stroke with a round hand lettering nib looks different when it is written with the left hand. The stroke is contorted by 90°.

To make it work, turn the paper by 90° to the right and write from top down. It may be unfamiliar to the eye, but you will get it very fast. The main challange is to bring the hand in the right position relative to the lines of the paper. I doesn't matter very much how the paper is placed on the table. You have to get the angle right and the direction in which you pull the nib.

▪ Have a look at the "Round Hand" page. The only adaption you have to make to the instructions you find there is the turning of the paper by 90°. And eventually you might have to find a new hand position. It's like going back to school, but but this time voluntarily. And it can bring a lot of joy, when you manifest some positive experience in this field by yourself!

Let me tell you that many people who write with the right hand have big problems with their hand position when they start to do calligraphy. It is not a problem exclusively for the left-handed. It has to do with individual writing habits which often do not support the use of round hand lettering nibs. 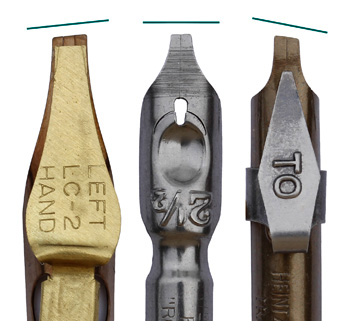 A left-cut nib is usually understood to be a lettering nib designed for left-handed writing. This is not the case. About 50 or 100 years ago - most of the nibs offered in the ▪ calligraph-shop have been manufactured by that time - the left-handed were not offered any special products, but as a rule have been re-educated to use their right hands for writing.

At that time, much emphasis was placed on how the pen holder had to be held in the hand. Usually two modes were accepted, and depending on the preferred position, either the left cut nibs or the right cut nibs were used.

1. The closed, upright position, where the ankle of the forefinger is pointing almost up: 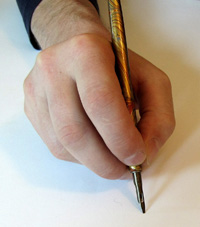 For this position the left cut nibs provide a more comfortable rest on the paper.

2. The normal, open position, where the ankle of the forefinger ist pointing to the right. 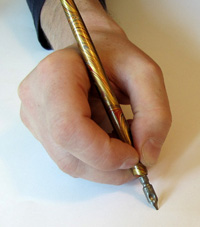 That's when the right cut nib was preferred.

Note, that when you write with the left hand, the recommendation for left- or right-cut nibs would be the other way round.

You can see now that the left cut nibs can be useful for both the left-handed and the right-handed, depending on the way one is used to hold the penholder in his hand. As well can the right-cut nibs be used by the left-handed. In general all kinds of pen nibs are suitable for the left-handed, usually the position of the hand is the main problem.