The steel pen museum on the internet with historical information

From each goose could be obtained an average of ten to twelve good quills, at most twenty. The Netherlands and Germany supplied large quantities of goose quills, but the main producing countries were Poland and Russia, where geese were raised in huge flocks mainly for quills. Over 27 million quills per year were exported from St. Petersburg to England alone.

In order to make better use of the quills, Joseph Brahmah patented a machine in England in 1809 with which he could cut the quill lengthwise and crosswise several times, thus getting up to twenty sections ("nibs"). These were sharpened and attached to a wooden penholder: These were the forerunners of the later steel pen nibs.

Abb. Section of a quill to put on a wooden holder.

The best writing and drawing quills are obtained from ostriches, swans, geese and ravens. The first two, which are very b, are used primarily for writing on parchment or thick paper, just as the goose feathers are used only for ordinary writing, but the raven feathers for drawing and fine writing. But now also very often the situational drawings and fine writings are made with goose quills.

Skinning the feathers, which gives them their proper hardness, and which brings out the fat, is done by a very simple trick. Either warm ashes or glowing coals are used for this purpose. However, there must be no coals in the ash, and it must be neither too hot nor too cold; in the first case, the feather softens too soon and becomes tough instead of hard, since it then gets teeth when cut; in the second case, the feather either does not soften enough, or the heat usually does not penetrate all parts of the feather, and then it gets teeth again.

The best way to prepare nibs and pens for writing and drawing is to treat them over a charcoal fire in the following manner. First, be careful that the coals do not give off a flame, otherwise the feather held over them would burn immediately. Move the feather quickly back and forth over the coals, often removing it from the fire to feel whether it has softened to the same degree. If this is the case, place a woolen cloth on the knee, take the feather in the left hand so that the back of it is turned under itself, hold it on the cloth, and press with the back of a broad knife on the top of the beginning of the feather, pull it through, as then a transparent weal appears and the outermost skin detaches. Then press the quill into its previous round shape by pulling it through a cloth while it is still warm. If you like hard spools, you can pull them twice and give them two stripes, but the feather must have cooled down before the second pull. Translated with www.DeepL.com/Translator (free version)

In order to be able to prepare good writing and drawing quills at a high speed, even without coal fire, take a piece of coarse blotting paper, lay it on top of each other six to eight times, wrap the quills into it, then place them on the knee, hold them with the flattened left hand, and move the feather back and forth with the right hand until it has heated up quite consistently, you will also get beautiful, pure, hard quills, freed from their grease, by this method.

It is an unpleasant thing when a feather gets teeth when it is cut. However, these teeth seldom go through the entire depth of the keel, and are only found on the surface; one now scrapes the keel until the teething has fallen away. When a quill has its proper hardness, it never gets teeth.

Dutch and Hamburg quills are considered the best; but also in Bohemia, and especially Transylvania, geese and ravens make excellent quills for writing and drawing.

Cutting a quill follows the same steps as for the reed pen. Only the material is different. In any case, the reed (bamboo) is recommended for practicing. On the one hand, the material is easier to work with and does not require pre-treatment, on the other hand, it is easier to obtain and much cheaper. It is available in any DIY store or garden center. 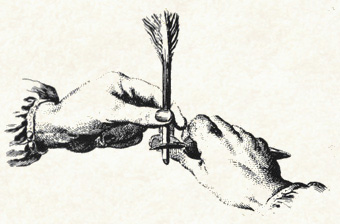 Instructions for cutting the reed pen can be found here.